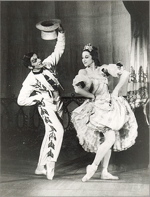 The film Ballets Russes is a documentary chronicling the rise and fall of the Ballets Russes dance company after the death of its founder, Serge Diaghilev, in 1929. What had started as a troupe of Russian refugees in England, soon divided into two competing companies, both of whom traveled the globe for many years. The last of these companies was disbanded in 1962.

Aside from its fascinating footage of early dance performances and its beautiful musical score, this film features the life stories of many of the principal dancers, told through interviews that were filmed at the Ballets Russes reunion five years ago. There is humour throughout the film as these dancers, many of whom are in their 80s, recall the early years of their careers when, as children, they had the privilege of dancing before audiences around the world.

What was most fascinating for me was seeing how many of the surviving members of the two troupes are still teaching. How encouraging it was to watch Irina Baranova, in her eighties, demonstrating movements she had performed as a teenager. George Zoritch, also in his eighties, was interviewed while working out at his local gym in Los Angeles. He is still active and still enjoying life.

I had the privilege of viewing the film at the Toronto International Film Festival, where one of the main dancers, Frederic Franklin, now 91, was in attendance. For the Q & A portion after the film’s showing, Freddie ascended the steps to the stage and answered questions from the audience. Although I did not get an opportunity to talk to him, I did get to speak with his partner who informed me that Freddie has never stopped being active. Freddie now owns a studio in Washington, DC, where he still teaches young dancers. Clearly you could see from looking at Freddie that staying active has added life to his years and not just years to his life.

For those of you who did not get to see Ballets Russes at the TIFF or its earlier showing at Sundance Film Festival, you will be glad to know that it will be opening in select cities this fall. It opens in New York on October 26, 2005. If you get a chance to see it, please do. You will undoubtedly be as moved as I was.

More information on this film can be found on the Toronto International Film Festival website and at MSN Movies.

I’ve just returned from the Can-Fit Pro Fitness Conference in Toronto and was thrilled to attend so many workshops on healthy aging and effective exercises for older adults. Many of the seminars were co-sponsored by ICAA, the International Coalition on Active Aging. Of the 400 sessions held, nearly 20 were devoted to exercise for older adults with such topics as aqua fitness, strength and balance programs, and the top ten trends in aging.

The message was clear. The older adult market is a force to be reckoned with. Exercise programs need to meet the needs of the aging population and facilities need to be age-friendly. Many other seminars referred to training movement instead of muscle with the emphasis placed on performing the activities of daily living (ADLs) and not just sports specific skills.

At a session on stability and balance training, I learned about the latest research which showed approximately 20% increase in overall strength and balance and 33% improvement in lateral (side to side) balance in just three months of perfoming specific exercises by the participants. Considering that one-third of people over age 65 residing in their own homes suffer a fall each year, which translates to 10 million falls in the U.S., that falls are the leading cause of injury-related deaths in older adults, and that the direct medical expenses of 1.8 million falls in the U.S. in 2000 translated to $16.4 billion, not to mention the pain and suffering, there is an obvious need to reduce falls.

More information on the ICAA can be found at www.icaa.cc

To your health,
Chris